You’ve certainly heard about antibodies, peptides and even DNA as therapeutics, but what about RNA? In this review, we paint an overview of what’s up in a young field that some believe could be as big a revolution as monoclonal antibodies.

For a long time after the discovery of nucleic acids, now almost 150 years ago, RNA has been considered an extremely delicate molecule, prone to degradation, and therefore dismissed in therapeutic applications. Today, however, major developments have made RNA a focus of medical research with incredibly exciting applications, such as better treatments for haemophilia, cheaper vaccines and even a universal cancer vaccine. Let’s review how the technology works and the latest advancements in the field.

RNA interference therapeutics are based on a natural process by which RNA sequences can block the expression of DNA into protein. The RNAi molecule binds to specific messenger RNA molecules that code a certain protein and directs it to the RNA-induced silencing complex (RISC), which cleaves the molecule and therefore the protein cannot be produced.

Or, as Alnylam’s President Barry Greene puts it, “If you have a leaking faucet in your kitchen, today’s drugs work by mopping up the floor; we shut off the spigot.”

Back in the early 2000s, scientists started to realise the potential of RNAi and its discovery ended up winning a Nobel Prize in 2006. This led to massive investments, such as Merck’s acquisition of Sirna Therapeutics for $1.1Bn (€940M). But soon after, several clinical trials showed the young technology could induce severe side effects and most big pharma shied away — including Merck, which soldSirna for almost a tenth of the acquisition.

This doesn’t seem to worry Barry Greene. “Big pharma is a miserable barometer for innovation. They only got into proteins and antibodies when it was already a $20Bn dollar market.” And although Alnylam has suffered a setback itself with an earlier candidate that was pulled after 18 deaths in the clinic, and the recent dosing halt with fitusiran, Greene believes that in just 3 to 4 years, RNAi therapeutics will be appreciated as much as antibodies or protein drugs.

His company is now on the finish line, with its drug patisiran expected to launch in 2018, which would make it the first RNAi therapy approved, possibly followed in 2019 by givosiran, a treatment for the rare disease porphyria. “We’re the leaders by a mile,” boasts Greene. “Nobody is even close to having the data, products and technology capabilities we have.”

However, the British biotech Silence Therapeutics is taking Alnylam to court, claiming that at least four of its most advanced drugs require a license from what is currently the only European RNAi firm. While the patent issue gets resolved, Silence’s own technology is also getting close to commercialisation through its licensee Quark Therapeutics, currently running Phase II/III trials for acute kidney injury and delayed graft function.

Silence Therapeutics is also trying to move away from typical RNAi indications to differentiate its pipeline, since the technology can go after targets that were, until now, undruggable. “As long as we can take the RNA to the cell, we can target any gene in the genome,” Laura Roca-Alonso, Head of Corporate Development, told me.

mRNA: A Myriad of Possibilities

Despite that the key role of messenger RNA in the translation of DNA into protein has been known since Crick described it in the late 50s, it hasn’t been investigated as a therapeutic product until very recently. “It has been only about 15 years since the first company focused on mRNA was founded. Before that, work on mRNA was purely academic,” explains Gita Dittmar, Head of Corporate Development at mRNA firm Ethris.

The idea of mRNA therapeutics is simple. If you deliver an mRNA sequence to a cell, it will use it to create the protein encoded there as if it was its own, removing the need — and issues — of producing it externally. In theory, virtually any protein could be produced using this method.

But in reality, working with mRNA traditionally came with two big obstacles. First, it is highly immunogenic. Second, RNAse enzymes that degrade it can be found pretty much everywhere life exists. But scientists can now easily get around these problems by playing with the sequences and making chemical modifications on the nucleotide building blocks that form mRNA. The challenge now is to make the technology work in humans, and the most advanced companies are only just getting proof-of-concept for several indications.

A Vaccine for all Cancers

At the front line of mRNA cancer vaccines is BioNTech, a German biotech with a big goal: to create a universal cancer vaccine, against all types of tumours. The secret is to tailor the treatment to each patient’s unique cancer. “If you try to compare two patients’ tumours, they are never the same,” explained Sean Marett, COO of the company, at Labiotech Refresh. “We recognise this fact and try to develop individualised treatments for each patient.”

In a first Phase I trial completed in July, 13 patients with melanoma were treated with mRNA containing 10 antigens unique to their tumours. All of them developed an immune response to at least three of the antigens. Such a technology has attracted big players like Genentech, which is already planning on combining the vaccine with its successful checkpoint inhibitor Tecentriq (atezolizumab).

Towards the $1 Vaccine Shot

Another big application of mRNA is in vaccines for infectious diseases, with potential in anything from the RSV virus that causes common colds to hepatitis and HIV. Among the main players in the mRNA space, CureVac is one of the most advanced in these applications.

The German company recently published results of a first Phase I trial with a rabies vaccine that serves as proof of concept of its vaccine platform. The news are particularly welcome given that last January a Phase II trial testing the technology in prostate cancer failed to significantly improve overall survival.

But, as Ingmar Hoerr, CEO of CureVac, explained to me, this just highlighted the need to “dramatically improve” the formulation of the vaccines, something the company has been working on for almost 10 years. Now, it’s ready to start testing a second generation of products, and Hoerr is optimistic of its potential.

“Compared to ordinary vaccines, mRNA is very stable you can store it at room temperature,” he explains. Which is a big deal considering that keeping the cold chain when delivering vaccines, especially to underdeveloped countries, is still a big challenge. In addition, the technology could make vaccines as cheap as $1 per shot. “It’s just about timing, it’s not a technical hurdle anymore,” says Hoerr.

Another exciting application of mRNA is to use it as instructions for cells to produce a functional version of a protein that’s faulty or missing. “The power of mRNA technology is that you’re actually able to get the protein to the right place inside of a cell, since it is processed as an endogenous protein would be,” says Gita Dittmar, Head of Corporate Development at Ethris.

Ethris is one of the companies using mRNA to replace faulty or missing proteins, in its case with a focus on respiratory diseases including cystic fibrosis. This approach could unlock therapies against new intracellular targets, especially for large proteins, which are more challenging to deliver. And this is precisely what attracted AstraZeneca to sign a deal with Ethris last month.

There are several other mRNA companies developing similar applications, such as Arcturus and Translate Bio. Though they still haven’t reached human studies, Dittmar sees the success of the most advanced approaches in cancer and vaccines as a win for the whole field, bringing in funds that are needed to eventually take the technology to the patients.

With a broad pipeline and rapid advances in research, the future might soon bring a stream of brand new RNA-based therapeutics, starting with RNAi. “Some investors don’t realize there’s still no drugs in the market,” comments Laura Roca-Alonso of Silence Therapeutics. “It is certainly a new field, but it’s quite de-risked in the sense that there’s a lot of clinical data.”

Alnylam’s President Barry Greene believes the possible approval of patisiran next year would be “a landmark in the field” and the first step to raise awareness of the potential of RNAi and increase investment.

In fact, seeing these companies close to the finish line seems to be building up the hope of big pharma again, with Amgen stepping up last year to offer Arrowhead Pharmaceuticals a deal on RNAi for heart disease, and Merck going back to the RNA field with the acquisition of the German Rigontec for its cancer immunotherapy this month.

In the case of mRNA, investor interest doesn’t seem to be a problem, at least for some. US-based Moderna Therapeutics, which is dabbling in almost all possible mRNA indications, has managed to raise over $1.9Bn (€1.6Bn) and reach a valuation of $5Bn (€4.3Bn) even before data from its first clinical trial was released in April.

The DNA of life on Earth naturally stores its information in just four key chemicals — guanine, cytosine, adenine and thymine, commonly referred to as G, C, A and T, respectively. 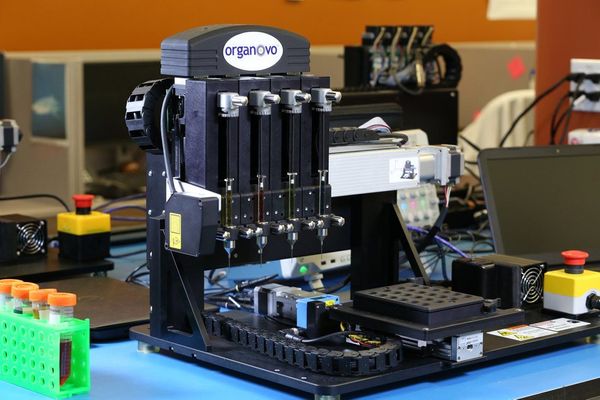 In the next 5-7 years, the bioprinting market is estimated to expand by 15.7 percent, and it is anticipated to grow over $4.70 billion by 2025, according to